B. Due Santi Cavalieri.

San Nicolò Inferiore represents a unique example of Byzantine style church in Ragusa District. Hidden behind a garage, the cave church was discovered in 1987 by a boy playing football: he went to fetch his ball and found Jesus.

The  church, located in Modica Bassa, the lower town, dates back to Norman period (XII Century). It’s 9 meters long and it shows three different periods of frescoes on the apse. The oldest is on the ceiling:

A. Christ Pantokrator, King of the Universe in an Almond, with the angels.

B. Two Saints on horseback.

C. Two Bishops to the right of the apse;

In the 14th century new frescoes were painted on the apse:

4. The enthroned Virgin Mary of Odigitria, the Conductress, and Child.

7. A Bishop, probably S. Elois, a French Bishop from Paris.

8. In  the 16th century they painted the panel of “Sanctu Iacupu in trancis” – St. James cut off in pieces.

9. Some graves, excavated in the 16th century, are located next to the apse.

10. The font had a fresh water spring whose water flowed down into a huge basin for the baptism (11). 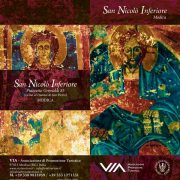